The second quest released in the second technical beta of Eterspire and the one set in Stonehollow Swamp. In this Eterspire tale, you shall play the role of arbiter to settle a dispute between the goblin Smellyfeet and the daughter of Hans (who takes after her father), Katalyn the warrior. To initiate the quest, you must journey through Stonehollow Swamp and Stonehollow Swamp Depths, following the road and then the (many) signs placed by Smellyfeet. Right before arriving at Smellyfeet's home, turn right up a hill to find Katalyn's house and speak to her to start the quest.

Speak to Katalyn. She will tell you a tale or two of her exploits fighting in the Swamp, and then ask whether you wish to help her in getting revenge on the goblin Smellyfeet who stole her dagger. However, she agrees to forego beating up Smellyfeet should you be able to bring her dagger back to her. When she finishes, respond with "okay" to initiate the quest.

Next, go to Smellyfeet's house and speak with him (or directly ask about the dagger by saying "dagger" to him). He will state that the dagger is undeniably his as he found it, but the prospect of being beaten up by Katalyn changes his mind. He says that if you bring him Slug Pie, he shall return the dagger. If you say "slug pie," he will give a clue that to bring him a Slug Pie, you will have to speak with a chef. 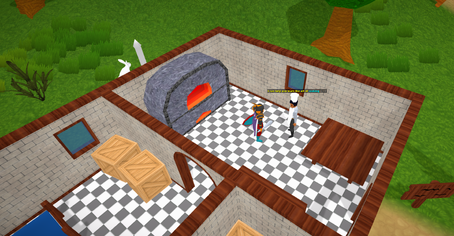 There is (as of the Swamp update) only one chef in the game, that being Chef Garson in Stonehollow. Go to him and ask him about Slug Pie (by saying "slug pie"). For him to bake you a Slug Pie, you will need to bring him 5 Blue Slugs, and 25 Coins. If you do not have a Sea Bug Cage, first go to Fisherman Sam to buy one. Then, go to Stonehollow Swamp and fish at a Slug Fishing spot. You will get all sorts of slugs - for this quest, you only need the Blue Slugs. For convenience, you can cook them using the bonfire in the same map (which is close to the warp point to Stonehollow Swamp Depths - to get to the bonfire, follow the road nearly until the warp point, then turn right. The bonfire will be in that area).

Community content is available under CC-BY-SA unless otherwise noted.
Advertisement